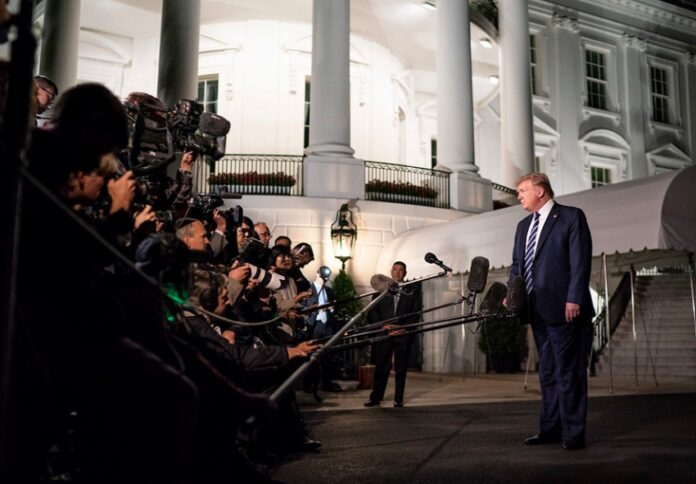 US President Donald Trump goings on with his lies to the American people. With his latest actions, he has been showing to be an incompetent liar, and to push on some conspiracy theories. By doing so, he puts in risk milions of American’s lives. Trump is not worthy of being called president.

Trump is not worthy for being POTUS

Donald Trump, since he was young, has been used to break the law without being punished.

As a business man, Trump has always behaved in a ruthless way, and he has always spread lies, by bragging for successes he has never got. For example, he has always lied on his net worth, or exaggerated about the hight of the Trump Tower.

When he decided to become a USA 2016 candidate, he started behaving as with business: to be a patological liar and to spread conspiracy theories. In fact, he made up a conspiracy about Obama’s birth certificate. Moreover, he declared Ted Cruz’s father helped to assassinate John F. Kennedy.

When he officially ran for President, many people thought of a joke. How could he win, a so inept man? And instead, with his shrewd methods, he succedeed in winning the electorate for the White House conquering.

Trump in the White House

Once he conquered the White House, I told me: “Now it could behave as a President, maybe. He will change his methods”. But no. We can say Trump even got worse in the White House.

When he entered the Oval Office, Trump became a sort of super disinformation popularizer. He lied so many times, that these ones are impossible to estimate. He is the first President to embrace a conspiracy theory, especially from extreme right parties. Trump put his figure over the American people. And he changed the federal government into a slave.

With the coronavirus pandemic, I thought: “I think Trump could now behave as a president, at least just for this time”. But I got worse again.

Trump lied to the American people on the danger of the virus. He encouraged Americans to refuse to follow the science. And, most of all, he succedeed in polarizing a health emergency. He did not car about experts, and he continued to organize rallies without masks or social distancing, putting at risk his endorsers. Trump put pressure on CDC in order to get a vaccine against the covid, without caring about its safety or its efficience, feeding American skepticism on vaccinations.

Then Trump was tested positive for coronavirus, and I thought: “This time he will learn the lesson”. But I quickly realized I got worse again.

President Trump, during his recovery in hospital, continued to minimize the virusand to break the law. During his recovery, he even went out for greeting his supporters. This decision has been strongly criticized by the Walter Reed Hospital doctors. They said the president’s behavor was irresponsible, and it put at risk Secret Service agents an other people exposed.

Moreover, the claim he sent a wrong message: people can go out, even with the coronavirus. After the hospital discharge, Trump claimed American people does not have to be scared by the covid. He also said he is a hero, because he defeated the “chinese virus”.

So, in his own opinion, the more than 200 thousand Americans died due to the virus are losers and weak. Once he came back to the White House, he showed again he do not care about experts’ opinions. In fact, Trump immediately pulled the mask down, putting at risk his closest assistents.

Donald Trump declared: “We are learning how to live with the covid, which is very less letal than a flu for the most of the country.

Donald Trump, for this, is not worthy for being called president. Are Americans going to understand this?

Read also: Dear President Trump, this is the America you have created