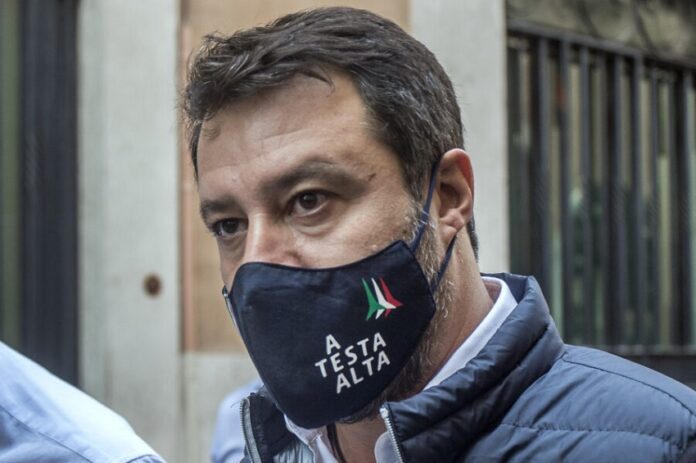 The trial to Matteo Salvini for the case Gregoretti has started. The PM has asked for an archiving while the judge has postponed the hearing to 20th of November, asking to listen to the Prime Minister Giuseppe Conte, the Foreign Minister Luigi Di Maio, the Interior Minister Luciana Lamorgese and the former ministers Danilo Toninelli and Elisabetta Trenta. Salvini exults.

Salvini on trial for the case Gregoretti

Yesterday the indictment for the case Gregoretti has taken place in Italy. This case sees as defendant the Lega leader Matteo Salvini, who, when he was the Interior Minister, blocked 131 migrants on a ship in order to avoid their landing in Italy. Salvini is investigated for kidnapping.

The Lega leader, as Interior Minister, adopted a strong way in order to try to stop the arrivals of migrants. In fact, he criminalized the NGO and he stopped every ships of migrants because he did not want them to land. He implemented such a close ports policy.

In the case Gregoretti, Salvini held stuck migrants on the ship for three days and three nights long, in order to avoid their landing in the country. However, we need to highlight a particular: the ship Gregoretti is not a foreign ship or a NGO’s, but it is an Italian Coast Guard‘s ship. So, technically, migrants were already on the Italian soil.

The former minister is so accused for kidnapping. In Salvini’s opinion, he did not break any law, but he only defended his country’s borders, the main duty of an Interior Minister.

Yesterday, as the hearing started, all the center-right was united for Salvini. During the flash mob in Catania, there were also the leader of Fratelli D’Italia Giorgia Meloni and the vice president of Forza Italia Antonio Tajani.

Other ministers will be called to the hearing in November

During the hearing, the defense of Salvini, presited by the lawyer Giulia Bongiorno, asked for a further preliminary activity. The judge, Nunzio Sarpietro, accepted the request and postponed the indictment to the 20th of November.

He established that the Prime Minister Giuseppe Conte, the Foreign Minister Luigi Di Maio, the Interior Minister Luciana Lamorgese and the former ministers Elisabetta Trenta and Danilo Toninelli will be listened.

The judge also has arranged the acquisition of documents of other landings happened in the same months of the ship Gregoretti.

Salvini is about to exult for the postponed hearing

Matteo Salvini exults, and claims: “It was my first time in a tribunal as potential guilty and defendant. I am absolutely satisfacted of having heard from a judge that what I did, I did not do alone. It was part of a procedure”.

He continued by saying: “I refused to say Conte and the other ministers are guilty, too. My idea is they are innocent, too. I could tell the countrary, as a spirit of revenge”.

Salvini has been changing his trial into a show. This is a thing we could wait for by the leader of the Lega party. Another thing of which we cannot be surprised is the fact in Italy people who violate the law is not on trial. Everyone thinks to be persecuted by the magistrates.

This trial was only around Salvini’s show, but they did not take in consideration the trampled on rights and the violated international laws.

We are going to see what will happen on 20th November, but surely this has been a victory for Salvini, a man who, as minister, violated lots of laws.